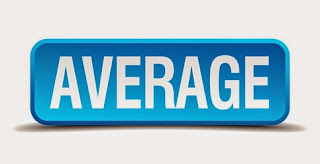 Just a quick post this week on a quite subtle issue.

If I can do a calculation using basic functions, I tend to do that rather than worry about finding a more advanced function to do the same thing.

instead of using Excel’s AVERAGE function.

An emailed question I received last week prompted me to re-think that approach.

The questioner had a problem with an average calculation, and wanted a formula to calculate an average, taking into account how many numbers were actually in the range. i.e. ignoring text and empty cells in both the numerator and the denominator.

My first instinct was to expand my existing approach. The SUM function will ignore anything that isn’t a number anyway, so my numerator was fine.

The denominator would also need to ignore text and blanks too, for the average calculation to be correct, so I came up with:

NB: The COUNT function counts the number of cells containing a numeric value in the range.

This works, but a little more digging and I discovered that the AVERAGE function does this by default!

So the far simpler answer is: